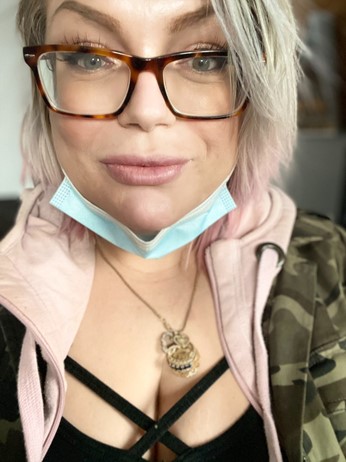 (March 3rd is also sex workers rights day – different from sex workers day – March 3rd is International Sex Worker Rights Day | HIV Community Link (hivcl.org), Nat asked us to share her post on our social media on March 3rd and for us to mention this)

Nat Kaminski is a gender queer mum of one that newly celebrates her 41st year around the sun. They also identify as a person who uses drugs and holds lived experience as a person who spent 16 years embedded in homelessness, poverty, the child welfare system as a crown ward and in various conflicts with the law and justice system. Nat began their work in advocacy and policy work at a very young age as she began advocating for lifting the age that wards aged out of the system. Nat had always believed that the voices of those impacted needed to lead the way starting at the young age of 15 in 1996 when they started a newsletter for wards providing resources and opportunities to engage in their aging out process. After exiting care they were thrown into the adult welfare system completely lost on how to survive financially on $520 a month they found themselves engaging in sex work and using substances in a chaotic way due to the criminalization of sex workers and drug users. It was those experiences as a criminalized person that eventually led Nat to advocating for the rights of sex workers in the region of peel. Nat found their home at Peel HIV AIDS Network in 2013 as a student placement in the harm reduction program and from there was hired into the Womens Community Development Coordinator and was successful in securing a number of grants to begin work on addressing the needs of female identifying sex workers in the region. The Peel Sex Workers Needs Assessment completed in 2017, a couple months after Nat welcomed their first child Emma into the world. During their maternity and paternal leave Nat continued to engage with various harm reduction calls to action and found hope and purpose in supporting Moss Park Overdose Prevention Site to become a realization. With the limitation of having a new child they volunteered on site when possible but were able to rally friends family and community members to donate food, drinks and naloxone to the site as often as possible. They returned to Moyo in late fall of 2017 as the harm reduction outreach coordinator tasked with expanding services to reach folks that weren’t engaged in services. That task drove Nat to create a space online for pwud from peel to connect with one another and after 6 months of sleepless nights the peel drug users network was born and functioning with over 300 active members. This day Nat continues to run the peel drug users network and has confounded the Ontario Network of People who Use Drugs and sits as acting president of both; they also sit as an executive board member of the Canadian Association of people who use drugs as Secretary. Nat is also currently a research assistant with Dr.Carol Strike and has been published on the “Remote Spotting” research project that explains one community care model that pwud use to support one another in the face of a poisoned drug supply. Nat is also a consultant and project lead at the Dr.Peters exploring the impacts of gender on barriers to access for safe consumption services. They continue to work in the region of peel in harm reduction as the harm reduction peer programs supervisor and cochair the Peel Sex Workers Alliance. They reside in Milton Ontario which is the original and just lands of the Mississaugas of the credit river and as an unwanted guest continually try to work from an anti racist anti oppressive decolonized lens. As a parent they are committed to teaching their daughter as much as possible about the colonial, patriarchal and racist system under which most of Canada was built from and that continues to rob their family of friends and loved ones. Nat continues to bring opportunities into community and empowers others to take up space where they are necessary and or missing. They call on all those who hold privilege and power to DEMAND change and STOP THE SENSELESS BUT INTENTIONAL NEGLIGENCE that is killing pwud across Canada at expedited rates. Silence is compliance and this IS MURDER. Nat mourns all those they loved, is grateful to all who paved the way before them and remains in solidarity to all their comrades engulfed in the constant grief and loss of the failed drug war.